Great futures start with you.

Please select the amount of your secure, tax-deductible donation

All payments are managed securely through Stripe, and we will never have or retain your credit card information. If you prefer to contribute by mail please download and submit this form (PDF) or contact Kelly Knoke: (414) 267-8118.

A Club for Armanii, the poet

Every day, Boys & Girls Clubs of Greater Milwaukee sees nearly 5,000 kids walk through our doors. Each of those young people has their own unique needs they are looking to have fulfilled; from a warm meal, to academic support, creative outlets and much more.

Meeting direct service needs of youth is only part of the puzzle. The Clubs know that now more than ever youth in our community face a wide array of trauma, and the effects of that trauma can last a lifetime.

Imagine having to walk home after a long day of work, and not knowing whether you were going to eat, if your house would have electricity, or what you’d encounter on your way home. Unfortunately, these are just some of the issues that young people in our community face on a day-to-day basis before and after school. In recent years, our community has made strides toward identifying these negative factors, and understanding how they affect young people’s ability to succeed both inside and outside of school. But there is still more work to be done.

Boys & Girls Clubs is working to address these needs by making Social Emotional Development practices a core part of its mission. These changes have taken many forms, such as investing in new tools like calm down carts, and providing staff training in areas such as trauma informed care and mental health awareness.

The positive effects are already on display with our members. Take Bay View High School student and Club member Armanii for example. Armanii and his family moved to the city before his freshman year of high school. He recalls having few friends, and being socially awkward. He decided to join Boys & Girls Clubs as a way to meet people and try new things. Shortly after joining the Clubs, Armanii experienced a personal tragedy, as many young people in the city do. The already shy young man became a recluse and fell into a depression. 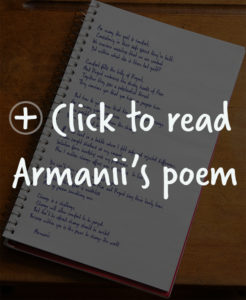 “I didn’t really know how to deal with some of the things I was experiencing, and I felt like I didn’t have anyone to talk to,” Armanii says. “Boys & Girls Clubs really helped me through that tough time, and particularly the Club Manager Ms. Morgyn. She always came off as a genuine person, and someone I could trust and use as an outlet for things going on in my life.”

The Club’s staff were able to recognize changes in Armanii’s behavior, and help him through a difficult time. The Clubs were also able to support a variety of outlets for Armani to express himself and connect with his peers. In addition to being a part of his school’s football team, and enjoying activities like weightlifting, Armanii developed a love of poetry and creative writing, something he credits with improving his mental state. “It’s a way for me to get my thoughts out, and express myself positively,” says Armanii. “And as a kid who’s big, who’s an athlete, not everyone would expect me to also write poetry. Sometimes they think I’m joking with them.”

As the Clubs helped Armanii come out of his shell, together they were able to focus on what’s next. Armanii’s support staff at the Clubs helped him identify what was important to him, and figure out a plan to get there. In the fall, he will be attending Wisconsin Lutheran College on a partial football scholarship as he pursues a degree in nursing. Helping people is at the forefront of Armanii’s priorities, and he couldn’t think of a better way to put that into practice than nursing.

The Boys & Girls Clubs experience meant so much to Armanii that before he heads off to college he wants to pay it forward, and will be working this summer at the Don & Sallie Davis Club on the city’s south side. In his own words, “My Club helped me develop socially, emotionally and was a catalyst for me personally. I don’t think I’d be on my current path toward success without the Clubs.”

Armanii is one of many examples of Social Emotional Development practices producing positive results in the Clubs, but there are still many young people who need access to these support systems. Whether a child needs someone to talk to, or is just looking for a place to have fun, Boys & Girls Clubs of Greater Milwaukee strives to be there for every kid, every day.

With more than 40 locations throughout Milwaukee, we aim to be A Club for Every Kid. Find a Club near you and enroll today.

Learn more about...
Our Locations
HELP SPREAD THE WORD: